Insulin… not calories causes fat accumulation. For the past 40 years we have been told that we are overweight/obese because we ate too much and did not exercise enough. This is simply FALSE! And it is easy to prove — See “Excess Calorie/Low Insulin Study” below. Unfortunately, we are bombarded every day with the same failed approach we have been recommending for the past 40 years… a semi-starved diet that restricts calories, cuts saturated fat and protein. This has left us with a myriad of failed “yo-yo” diets where we lose a few pounds and then regain the weight and then some. When you understand how FAT accumulates then you will begin to understand how to reverse obesity and diabetes. While obesity does not cause diabetes, the same thing that causes diabetes causes obesity… insulin. Gradual weight gain every few months is indicative of the overproduction of insulin. 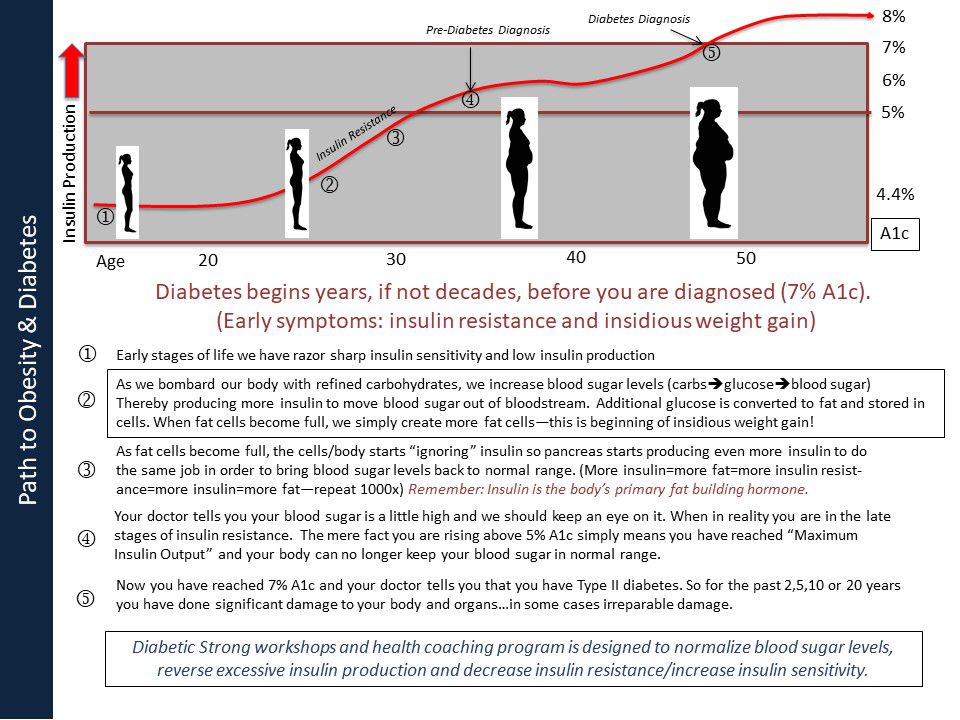 We can spend a lot of time dancing around the notion that somehow semi-starved, calorie-restricted, low fat diets coupled with chronic exercise may help us lose a few pounds in the short term but this approach has NEVER worked and will never work in addressing long-term weight loss. This is the same strategy that has been recommended for the past 40 years… success or epic failure?

CDC now reports 70.7% of Americans are overweight or obese
We have known since the 1960’s that high insulin levels drive fat accumulation and weight gain. In fact, Salomon Berson & Rosalyn Yalow—1965 Nobel Prize Winners—stated, “Anything that makes us secrete more insulin than nature intended, or keeps insulin levels elevated for longer than nature intended, will extend the periods during which we store fat and shorten the periods we burn it.” This is basic human physiology and biology… the body simply CANNOT burn fat in the presence of high insulin levels. Certain foods we eat will raise insulin levels and “turn on” the fat storage process. As long as insulin levels are high you will not be able to burn fat as fuel and burning fat as fuel is how we lose weight. Remember this above everything you have ever learned or know about weight loss:

“The success of ANY diet will be determined by the degree in which it lowers insulin production… period!”

So I decided to test this theory with my own “Excess Calorie/Low Insulin Study.” If weight loss could be achieved by “cutting calories” then weight gain should be possible by increasing calories. In this informal test I started by increasing my calorie intake from (3100 to 4100) and increasing the number of carbs and corresponding insulin needed to “cover” those carbs. (I do not make insulin making me the perfect person to accurately test this theory) To accurately measure the effects of carbs, sweet potato was measured and used to add additional carbs to the High Insulin Test Diet.

Interpretation: Simply increasing calories from 3100 to 4100 calories per day should have caused weight gain on the Low Insulin Diet… It did not! On the other hand, in the “High Insulin Diet,” while the caloric intake was the same I gained 6.5lbs. Why? Because insulin is the body’s primary fat building hormone and I tripled the amount of insulin to cover the higher level of carbs. Insulin…not calories causes weight gain. Furthermore, the epic failure of the “low calorie/low fat diet” was fully exposed in the Women’s Health Initiative Dietary Modification Study. Nearly 50,000 women embarked on a 7-year, low-fat, calorie restricted diet. The results: the diet produced NO benefits in weight loss, heart disease risk, cancer or stroke—why would you starve yourself for 7 years with no beneficial outcomes? It simply does not work and studies like this litter the nutritional landscape yet for reasons of price, prejudice and profit we bury, or do not report, these findings. So if a “semi-starved/low fat diet” is not the answer then how about exercise? While exercise is highly beneficial from a health perspective, the results as a weight loss tool are unimpressive and often overhyped. Study out of the British Health Foundation (2012) showed that from 1997-2008 regular exercise by citizens in the United Kingdom increased from 32% to 39% in men and 21% to 29% in women. The result: no effect on obesity at all. A recent eight-country survey showed that American’s exercised the most—135 days per year compared to a global average of 112 days. The Dutch came in the lowest at 93 days per year. So the Dutch should weigh more right? The Dutch and Italians experienced less than 1/3 of the obesity rates as Americans. The bottom line: In order to achieve lasting weight loss you must address two things:

Our Diabetic Strong Workshops and Coaching Classes will give you the framework, information and tools to successfully manage your diabetes/weight gain and put you on the path to optimal health.

Disclaimer: Information provided through this site and links to other sites is not designed to and does not provide medical advice, professional diagnosis or treatment to you or any other individual. Diabetic Strong provides general information for educational purposes only. The information provided here is not a substitute for medical care and should not be used in place of a visit, consultation or advice of your physician or other medical provider. Diabetic Strong is not liable or responsible for any advice, course of treatment, diagnosis or any other information, services, or product you obtain through this site. Any results demonstrated on this website or other links related to diabetes and/or weight loss is not a guarantee of similar outcomes. Every individual does and will respond differently to the information provided. Do not change any course of treatment without consulting your physician.